The inaugural London Web Summit took place on 19 March 2012. It was formed out of a merger between the two largest UK & Ireland web conferences, GeeknRolla and the Dublin Web Summit, and was hosted by TechCrunch Europe Editor Mike Butcher and Paddy Cosgrave of the DWS. 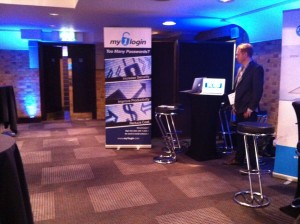 Its aim was to bring together startups, investors, media, tech gurus and digital leaders. Having launched our public beta service just 2 weeks earlier, my1login was keen to attend and exhibit.

After a late evening's networking at the Hoxten, it was an early start on the Monday; arriving at the venue for 7am to set up. There was a definite 'calm before the storm' feeling as we put together our stand and setup our demonstration laptops. A cup of coffee and some pastries later we were ready to go. 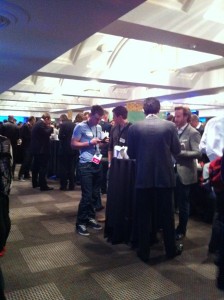 The George III suite flooded with people when the doors opened and our stand was busier than we anticipated throughout the day.

'Too many passwords?' was obviously a captivating question! The busy stand made it an easy decision to remain at it all day, although it was at the cost of not being able to take in the presentations on the main stage. If you missed them too, you can check out a replay of them here: London Web Summit Videos.

Visitors to the stand covered a wide cross-section; from tech professionals with an interest in how it worked technically, to venture capitalists interested in the business model. 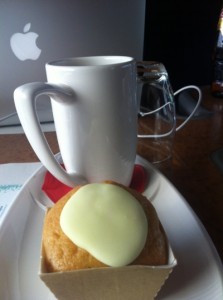 Our reward - tea and cakes

Once our suite closed, we rushed up to the main stage where we caught the end of presentation which saw Seedrs pick up the award for best startup. We'd have loved to get the chance to pitch on the stage, but it wasn't to be. Our aim is get on stage in the Dublin Web Summit later this year!

Tech Hub was our port of call on Tuesday morning, to hold our board meeting and follow up the interest from the previous day. We then caught the afternoon train back up to Glasgow. It was an intense few days down in London. We met some great new people, raised awareness, and we got our deserved reward on the train journey back home - some superb tea and cakes!